The latest evaluation of Chile’s Law of Food Labeling and Advertising finds that under Phase 1 of the law’s implementation, Chileans purchased significantly fewer calories, sugar, saturated fat, and sodium than would have been expected had the law and its regulations not gone into effect.

The study, published in the August issue of The Lancet Planetary Health, combined data on household food shopping from 2015–2017 (during Phase 1 of the law) with nutrition facts data for all the products purchased to examine changes in what groceries Chileans bought before/after the law took effect.

Overall, purchased calories, sugar, saturated fat, and sodium declined significantly. Among “high-in” purchases (junk foods and sugary drinks that did not meet Phase 1 nutrition criteria), households bought 24% less calories, 27% less sugar, 16% less saturated fat, and 37% less sodium compared to what they were expected to buy, had the law not come into effect.

This evaluation builds on and confirms findings from the Global Food Research Program’s previous evaluation of changes in beverage purchases during Phase 1. In that study, authors observed a 24% drop in the volume of sugary drinks purchased and a 28% decline in calories purchased from sugary drinks, compared to expected purchases had the law not taken effect.

These results highlight the potential for multi-component policies to significantly impact people’s shopping and consumption habits. The GFRP team will continue working with colleagues in Chile and Mexico to evaluate changes following implementation of Phases 2 and 3 of the law, which have increasingly strict nutrition standards.

Read more about this research and its implications, according to the study authors.

Funding for this study was provided by Bloomberg Philanthropies, the International Development Research Center, and the Carolina Population Center (P2C HD050924). 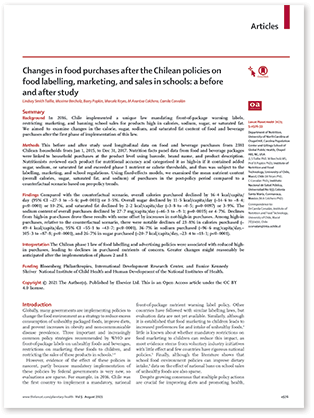 In 2016, Chile implemented a set of policies to improve the country’s diet and health. The law identifies junk foods using certain nutritional criteria. Any packaged foods or drinks that fail to meet those criteria are subject to:

Restrictions on marketing to kids (e.g., product may not be advertised on TV from 6 am–10pm, can’t use child-appealing creative techniques in marketing, etc.); and

Banned sales or promotions in schools